There’s a bunch of RC planes available on the market today, and you may be wondering how they differ from drones. Or maybe you’re trying to decide which of them to buy for yourself or as a gift?

Whatever the case may be, look no further. It’s time to clear away the confusion and show where the differences lie.

What’s the Difference Between a Drone and an RC Plane?

There are a few key differences that set remote control (RC) planes apart from drones.

The first of these has to do with their structure and the way they are built.

For all their ability to take to the skies and fly, remote control planes are usually quite flimsy in design and structure.

There are several different types of RC planes, but the models you are most likely to come across one day are made of lightweight, low cost materials like cardboard or foam.

Any unmanned aircraft enthusiast would agree that you could literally build an RC plane from scratch at a kitchen table.

And because of the flimsy design and shaky frame, RC planes can be unsteady in the air, prone to unwanted gyrations.

As such, you are rarely going to see an RC plane used for anything other than recreational purposes. Although a few advanced models come equipped with video feed and are capable of reporting navigational data, they are not anyone’s choice for practical, commercial purposes like photography or videography.

This low quality nature of remote control planes reflects in their price tag. Even the sturdier models tend to cost less than the average drone. And this is just as well, given that they are less versatile and barely useful outside of recreational activities.

Drones, assuming we’re talking about the flying kind — UAV drones, on the other hand, are typically sturdier devices. They come with a host of functionalities and capabilities that put them in a different league when compared with RC planes.

While drones are built of material that is sturdier than what is used for remote control planes, they are still light enough to be dynamic and easily maneuverable in the air.

This versatility in the air, in addition to the many functionalities which they can be equipped with, make drones a staple for many industries.

For example, camera drones are becoming a must have for the photography and film industry. This is due to their ability to hover at heights that are too low for helicopters and too high for humans to reach on foot.

The result is epic photos that were not possible just a few years ago.

Militaries have been using drones for decades — even before they became widely accessible to the public.

Their lightweight nature and cost-efficient frame has made them easily replaceable when they get shot down in risky environments.

In addition to that, they are durable enough and high-tech enough to perform difficult operations that are too dangerous for humans.

Plus, they can carry different loads, both lethal and non-lethal, while travelling autonomously or under remote control.

Drones have expanded the limits of what was thought possible as far as unmanned aerial vehicles (UAVs) are concerned.

Another key difference between drones and RC planes lies in how they are controlled.

As the name implies, an remote-controlled plane needs a pilot to control it remotely. They are not capable of autonomous flight.

Drones, on the other hand, can fly autonomously. Many models do need to be controlled remotely, but there are drones that are capable of flying solely under the influence of their programming.

Lastly, many enthusiasts will ignore all these differences between drones and remote control airplanes to settle on the issue of capabilities. Hobbyists would tell you that the real difference that separates the two aircrafts lies in the limitations that they bring.

Drones present far fewer limitations than an RC plane. This is a good point to keep in mind if you wish to do more than watch your device zip across the sky.

Are Drones Easier to Fly?

Drones are relatively easier to fly than RC planes, and this is because of some of the functionalities which they come with.

For example, many drone devices come with GPS guidance that takes away the need for intense practice to attain the skill level to fly them.

Some drone models even come with return-to-home and auto-landing features which make it quite easy for a beginner to take off, move in any direction and land on the first few tries.

Beginner pilots of remote control planes do not have those luxuries and as such may find flying their devices relatively harder to fly.

Drones are also easier to maneuver and do tricks with. Once you master the basics of flying your drone, you can turn your attention to the tricks or moves programmed into them.

Any pilot could learn all these moves by simply glancing through the instructions manual—not by spending hundreds of hours honing their craft and sense of balance.

Different manufacturers might use different controls for tricks and basic flight but in general they can easily be grasped.

Basic flying, for example will involve using the two control sticks on the transmitter. With these, you can move the drone in any direction you want.

Doing tricks would vary between manufacturers. For example, some might require pressing a specific button to perform a particular trick or handling the sticks a particular way. And some might not be capable of performing tricks at all, of course.

In any case, you have a level of ease, control, and versatility that is simply not available to an RC plane pilot.

Flight controllers act as an interface between you the pilot and the drone. When you input a command with the transmitter, flight controllers respond by adjusting the speed of the appropriate motors. This change of thrust results in the drone moving in the required direction.

It’s as simple as that. The flight controller does this so you don’t have to think about it.

Some of the more advanced drones can even have their motor direction reversed in a split second by the flight controller. This is feature is becoming more common among drone models because it makes sustained inverted flight possible. And this, in turn, means more three dimensional tricks can be built into the transmitter.

This versatility and hands-off control is not available in an RC plane. Remote control planes are fast, making it difficult for pilots to perform any pretty “tricks” like the ones seen with drones.

An RC plane’s high speed also means pilots have relatively less time to dodge obstacles and avoid crashing. You would rarely see them being flown in closed spaces like a house or an office, though some drones are also capable of breakneck speeds.

You are more likely to see RC planes at their roaring best in open parks specifically dedicated to model flying. Becoming a true master at flying them comes with a certain pride within the community.

Undoubtedly, the relative ease of flying drones plays a huge part in their popularity today. While the RC plane remains largely the preserve of flight enthusiasts and hobbyists, drones have gone mainstream. They are now being used in many industries to push the boundaries of what is possible.

On that note, it is worth insisting that drones (as well as RC planes) are certainly not crash proof. They still require practice and discipline to master.

For example, with the camera drones, it is quite easy to lose concentration and accidentally fly your drone out of your line of sight and into danger or out of range.

Can You Get RC Planes With Cameras?

RC planes have come a long way. Today, you can hook them up with a camera and fly them while enjoying first-person-view (FPV).

This is largely thanks to the increasing availability of affordable small, light-weight cameras and video transmitters. The video signal is transmitter to the ground control so that a real-time video feed is viewed either through a monitor or video goggles.

Video goggles offer a much more immersive experience, since they shut out all outside references and allow you an immersive Virtual Reality seat in the cockpit. The pilot sees only what the camera sees, which is different from a monitor that allows peripheral vision.

Apart from the aircraft, common equipment for first-person-view RC plane flying include:

However, recording quality does usually differ from drones. It’ll be hard to find an RC plane with a 4K camera at all, let alone at the sub-$300 range that some drone manufacturers have managed to achieve.

Which Should I Choose?

Stuck between trying to decide between getting a drone or getting an RC plane? You want to remember your reasons for wanting to fly in the first place.

Drones offer much more versatility and control, and can do much more than just zip around the skies. They are also more expensive.

However, if you are a flight enthusiast who wants nothing more than to see their device fly then you should do quite nicely with an RC plane.

It all depends on what you want to do.

Many enthusiasts will have both, but if you must choose between one and the other, go for the one that accomplishes your goals best.

If you’re looking for an affordable RC plane to get yourself started, we’d recommend looking at this model: 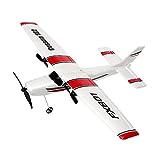 If you’re looking for something that is capable of flying at good speeds, teaching you how to become a good pilot, whilst also offering things like good quality video recording and a range of other features, we’d recommend looking at this extremely useful drone: