EACHINE E520S Review: How Have They Fit a 4K Camera in This?

For a long time drone enthusiasts who haven’t had the courage to pull the trigger on some of the prime offerings of leading brands in the market, and we totally get you.

Whether you have other priorities to attend to, or simply aren’t comfortable with the fact that you have to spend somewhere between $500 to $1000 just to be a part of this exclusive high-end zone, don’t worry. We’ve got affordable alternatives for you.

Since drones began to sell like hotcakes in the past 5 years or so, multiple companies have tried to cut down the cost on their end to provide consumers with some of the most affordable options. Unfortunately, most of these attempts are dismal failures, with these UAVs being terribly imbalanced in terms of specs and features.

The EACHINE E520S begs to differ though, as it sports a feature-rich design that doesn’t disappoint — on paper, at least.

How does it fare in the real world, though? Read through our comprehensive EACHINE E520S review to find out. 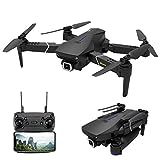 While most drones in the EACHINE E520S’s price range may skimp on this feature, this bird does not. With a GPS module, the craft can accurately plot its location on the map in real-time by connecting to available satellites that communicate with it to triangulate its exact position.

The GPS module also allows the drone to use its smart and intuitive flight features, and make them function as intended.

One Key Takeoff and Landing

To ease beginners who want to learn to pilot the craft, there is a user-friendly function in the One Key Takeoff and Landing feature. Basically, the drone responds to the push of a dedicated button to either initialize or set itself down from flight.

This avoids any kind of accidental maneuver that might result in crashes, which is often observed when amateurs try to do so during their first few flights. This can also be handy if you feel your dog days coming in.

Headless Mode is another beginner-friendly feature that eases newbies into the drone’s flight controls by ridding of the confusing scheme UAV flight usually comes with. It does this by having the drone completely ignore its own front-end orientation and instead relies on the pilot’s own front-end for navigation purposes.

As such, you won’t even have to constantly take a mental note of the current position of the drone and instead focus on flying it, as it now responds in a straightforward manner to your control inputs, regardless of where it’s facing.

We won’t guilt-trip you into not using it if you aren’t exactly a beginner, though. It’s great for easy flying for all ability levels.

The EACHINE E520S can lock onto a subject for a hands-free filming experience that is consistent and smooth most of the time. The drone automatically gauges the subject’s speed and distance, speeding up or slowing down in relation to the selected target’s own movement.

What’s a GPS drone without a Return to Home function, right? The EACHINE E520S protects itself in the event of low battery levels or signal transmission loss by keeping track of its initial takeoff point and will fly itself back automatically to avoid the drone’s possible loss.

You can also prompt the craft to enter Return To Home mode with a push of a button, forgoing the need for you to fly it back to you manually.

As the E520S comes with a smartphone app that allows access to a multitude of its smart functions, this also makes the drone more independent from manual controls. Such a feature is Waypoint mode, which makes use of the GPS module to bring up a real-time map of the drone’s current location.

The pilot can then proceed to plot points on the map, to which the drone will fly along once completed. You can either use this as a cinematography tool or to simply switch locations without having to manually do it yourself.

Another shot-augmenting function is Altitude Hold. This has the drone park itself midair, hovering in position with impressive stability. This makes photos and videos extra clear for your content creation purposes.

Orbit Mode is a cinematographic preset that has the drone encircle around a subject while keeping the camera trained at it. Its 360° coverage can be customized as well, as you can change the radius, ascent and descent action, and if you want it to fly clockwise or counterclockwise.

The EACHINE E520S has a 1200 mAh battery that provides it with up to 15 minutes of flight time, more or less.

You might be surprised that the slightly lower capacity can hold a generous amount of flight juice. This is due to the modular batteries being a newer, more efficient version of LiPo modules. If this isn’t enough for you, EACHINE offers a battery bundle of three that can be had for less than if you went for individual packs.

Charging each battery can take up to two hours though, so ensure you have your needed supply before heading out to fly.

Our review sample came with the 4K camera variant, though the EACHINE E520S is also offered at 720p and 1080p options. While this may seem like a really great steal for the price, we were a bit wary of what it really is and how it would perform in comparison to true 4K optics units.

To our surprise, the craft’s camera provides excellent video and photo capturing abilities, especially with the level of detail it can take in, which is most noticeable during wide scenic shots with the 120° field of view it offers.

Do note that to use the “4K” mode in its full potential, you have to use high-speed class SD cards in conjunction. The drone uses a 5 GHz signal for its live FPV feed as well, which is capped at around 250 meters.

With the specs and quality on offer, we judged this product to be one of the best cheap drones with a camera that you can get this year.

The EACHINE E520S comes with a small, ergonomic remote control that has all the functions and controls fit into its small footprint. The build quality isn’t all too appealing, though, as the cheap plastic shows through quite easily and is very evident once held. It does work well though and is comfortable on the hands especially when used for extended periods of time.

Take note that the drone’s controller takes in 4 x AAA batteries, so stock up on them or better yet, secure rechargeable ones to save more in the long run.

At first glance, the E520S suspiciously looks like the pricier DJI Mavic Air. And it does take in the leading design with no remorse, and it’s for the better.

This imitation gives the drone the same level of portability that its premium counterpart has, giving you the coveted foldable function present only on most mid to high-end drones.

Construction is evidently top-notch as well, using what we think is ABS plastic for most of the craft’s hull and other key components. This is further enhanced by the included propeller guards that protect the blades in the event of crashes.

As said earlier, portability is no problem with this quadcopter, as even the propellers fold down for your convenience when shooting on the go.

The 280-gram weight of the drone also helps in making it a comfortable package to lug around during your travels, though this means registering it with the FAA as it overshoots the requirements by a small margin.

As far as performance goes, the EACHINE E520S is no slouch at all.

It features a 3-speed mode selection that gives the pilot the chance to ease into the controls with the lowest, least sensitive setting for slow but steady flight experience. You can gradually set the speed and sensitivity to the highest setting if you have mastered the controls and need the extra maneuverability.

Stability is taken care of the 6-axis gyroscope and the brushed coreless motors, allowing the drone to automatically adjust its orientation even in the presence of breezes.

While the EACHINE E520S is far from perfect, it’s also more than perfect for a drone pilot who wants nothing more than a flyable craft that doesn’t compromise in terms of performance and usability.

It boasts a healthy flight time, responsive controls, extra-portable, and even sports a 4K-capable camera, you’d be hard-pressed to find a worthy competitor to match its bang for the buck value.

If you’re on the hunt for a drone that ups the ante by a considerable margin from the entry-level bracket but doesn’t hurt your wallet as much as premium offerings go, then the impressive EACHINE E520S is definitely for you.