Some 5 years ago, introducing your kids to the wonderful world of drone flying was often plagued with obstacles. These days things are much more simple, mainly pertaining to the question: which drone should I buy for my kid?

It’s a good thing that the growing interest in drones from the junior division has sparked competition in the market to push out a multitude of lower-end crafts that have their own personalities, all appealing to the youngsters.

One such drone is the Q4 Nano H111, from the rising Chinese brand Hubsan, that has a competitive spread of units available for purchase.

But is this drone the right choice for your child?

Read on in this Hubsan Q4 Nano H111 review to find out our thoughts. 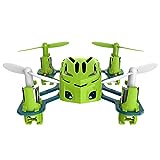 This drone packs a 6-axis gyroscope to help with its balancing act. Most drones only have a basic 3-axis unit that corresponds to the UAV’s pitch, roll, and yaw axes.

While this is better than nothing in terms of keeping the drone afloat and actually being flyable at all, the added sensor data from a 6-axis system outperforms the basics by providing a steady stream of useful analytics. These are translated by the drone’s flight system to automatically adjust its position based on the current flight conditions, hence the inherent stability.

The drone has LED units by the rotor housings and the front-end, making it an attractive treat to kids, as well as providing pairing and calibration information by a series of blinks or steady lighting.

This UAV uses coreless motors, which are basically downsized DC motors that lack an iron core in the assembly. This makes them viable for low-powered applications like nano toy drones.

While 360° tricks are generally met with stern rebuke here at Dronesvilla, it’s because the drones that sport it are usually capable of more than just gimmicks, and are not target for kid’s use. In this case, we’ll let it slide.

360° flips is a fun feature for your kids to add an enjoyable dimension to drone flying.

It’s not that flying this nano-sized bird isn’t delightful in itself, but the added flair brought by this party trick is second to none. Who doesn’t love a good acrobatics show, especially by a drone?

You always have the option to purchase more battery units if needed, and the batteries recharge in just 20 to 30 minutes as well.

The drone charges via an included USB cable, giving you options to charge it by means of a power brick or directly plugging into the USB ports of your PC.

You’d be hard-pressed to find a camera on a drone that costs almost next to nothing.

Apart from this financial constraint, the drone literally cannot fit a camera unit on its measly body. If you’re looking for toy drones that have cinematographic capabilities, we have recommendations up your budget’s alley as well.

Just like the craft’s size, its controller follows suit.

The remote control unit is quite petite in size, but it’s this exact reason why the drone is suitable for kids. The layout is comprised of dual joysticks, trimming buttons, and a toggle power switch.

The controller is obviously cheaply-made, and you might even mistake it for a nonfunctional dummy if you didn’t know better. It accepts 2 x AAA batteries for a continuous supply of power.

Seeing that the drone comes in at dirt-cheap prices, the Q4 Nano H111’s design doesn’t get more barebones than this.

The drone’s entire structure is mostly based on the printed circuit board that doubles as its frame and the protective canopy that secures the internals, as well as providing aesthetic flair to the drone.

While extremely lightweight and seemingly fragile, the quadcopter can hold its own in the event of crashes, which is surely bound to happen considering the target age market of the craft. It does not come with propeller guards, but the snap-fit mechanism allows the props to pop off if it hits an obstacle in a crash.

The drone is offered in five color variants: White, Green, Black, Yellow, and Red. You know how it is with kids and their leanings with colors.

The drone looks like a futuristic beetle with propeller arms instead of legs, sporting enough aesthetic gimmicks to entice your snotty brat.

We have no qualms in terms of the Hubsan Q4 Nano H111’s performance, as its responsiveness is akin to its pricier cousins. Looks can really be deceiving.

The drone’s 50-meter range is enough for its purpose as well, as we’d doubt you’ll still have visuals on the tiny craft beyond the 50-meter mark even if you wanted to use it further away than that.

The drone also has three performance modes to choose from, with 30%, 60%, and 100% levels available for your perusal. This takes care of the sensitivity levels, especially the yaw and speed settings.

That being said, the drone can achieve a maximum speed of just 4.32 kph — this is very slow, but again makes it extremely suitable for young kids.

Its lightweight profile suggests keeping it to indoor flight, as attempting to fly it outdoors especially with even the lighest of winds present will only end in disaster.

This bite-sized nano quadcopter fared better than expected as far as functionality goes, with very reliable flight performance. Stable, agile, and responsive, this warbler does what it’s supposed to do, and a great job at that.

Perhaps, the only downside to its design is its lacking flight time, which is totally understandable when taking its microscopic battery size into account. As stated earlier, you have an option to purchase additional battery packs if needed.

But probably the most appealing factor of it all is the dirt-cheap price this UAV comes in. Retailing somewhere in the $20 mark, what’s there to lose?

Introducing your children to the drone flying hobby doesn’t have to be an expensive affair, with the reliable performance and entertaining antics of the Hubsan Q4 Nano H111.