Potensic A20 Mini Drone Review: A Good Drone Under $30?

Recommending drones for beginners isn’t always rainbows and butterflies for us, especially when the consumer is aged somewhere between 8 to 14 years old.

This is tricky territory to do drone reviews, as we have to consider extra safety features and assistive flight functions that make drone flying a fun and safe experience.

For this particular write-up, we’re testing out the Potensic A20 Mini Drone, a toy grade offering from one of the most respectable brands around.

But why would you go with toy drones, you might ask. Well, for a simple reason: expendability. We can’t just go around suggesting $500 dollar units for someone with limited technological experience, right? Especially in the hands of a child where, let’s face it, it’s quite likely to be broken or lost.

That’s why the Potensic A20 Mini Drone looks perfect for children — or even as a fun gimmick for adults. It retails in the region of $30, so you won’t be regretting that much in case of accidents or losing the drone.

That being said, the Potensic A20 Mini Drone doesn’t come empty-handed at all. Kid-friendly features like protected propellers, assistive flight modes, and more are packed in this bite-sized craft.

Learn about what the drone is capable of, and whether it stood up to our testing, in this comprehensive Potensic A20 review. 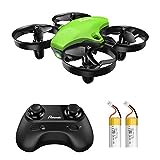 Perfect for kids who are just starting the hobby, the Potensic A20 Mini Drone has a One Key Takeoff and Landing function that automatically initializes or lands the drone with one button press. This is to get rid of manual maneuvering errors that may result in crashes or collisions, especially with a kid fidgeting on the controls might cause.

The drone is kept safe by avoiding tricky takeoff and landing movements, allowing your child to focus more on getting the basic controls when flying the drone.

Flying the Potensic A20 Mini Drone has never been more stable thanks to its Altitude Hold feature. Basically, the craft locks in on a set altitude and flies with that fixed value constantly.

This is handy to minimize confusion that may arise when trying to adjust altitude while moving the drone around simultaneously.

Furthermore, it minimizes the chance of fatiguing your kids as they don’t have to constantly look up while operating the drone, keeping it at their line of sight at all times.

When flying a drone, you have to consider the 3 axes of motion that it follows to operate it seamlessly. This is already a daunting task for adults to keep in mind, how much more for a kid who’s just about to have his first UAV experience in a matter of minutes. With this, the Potensic A20 Mini Drone incorporates the beginner-friendly Headless Mode.

This is the panic button for the Potensic A20 Mini Drone. When your junior pilot has seemingly lost all hope as the drone flies erratically due to his unintelligible control inputs, the Emergency Stop feature automatically halts all flying operations and promptly lands the drone, minimizing any risk of damage or injuries from arising.

We said earlier that the Potensic A20 Mini Drone is expendable, but it doesn’t hurt to save it this way.

The Potensic A20 Mini Drone has a modular battery pack that provides up to 6 minutes of flight time. Not particularly impressive, but where the drone lacks some stamina, Potensic makes up for it with an extra battery pack to double the fun.

There’s really nothing we can do here except recommend you to pick up several battery modules for extended flight operations if you’re looking for more time in the sky. Even if you doubled your drone budget, you’d still be looking at similar flight times as, for the most part, you’d need $100+ to get a drone with 10-minutes plus.

These batteries charge for about 40 minutes each, which isn’t an awful lot of time, but considering the power they packed, we aren’t too enthusiastic as well.

Nope, no camera here. This isn’t particularly surprising given its price. Potensic had to sacrifice optics to get this to market at the rock-bottom price that they have. Unfortunately this means no photos, no videos and no FPV mode, but there’s still plenty of fun that can be had.

Just like the Potensic A20 Mini Drone itself, its controller doesn’t lag behind in terms of cuteness.

The mini-sized controller takes design cues from gaming console controllers, sporting the dual joystick layout with a sparsely-populated controller face, comprised of its main function buttons and a Power key. The transmitter is powered by 3 AAA batteries, however, so stock up on rechargeable ones for future use.

What we love about the Potensic A20 Mini Drone’s remote controller is its audio alerts when the drone is about to run out of power, or when it is nearing its range limit. While the presence of an LED screen could never be beaten by this auditory feature, it still provides your pilot something to work with to immediately prioritize the drone’s retrieval.

The Potensic A20 Mini Drone is a small-scale quadcopter specially designed for kid’s use, hence its conservative weight and dimensions, making it easy to lug around, or — God forbid — inflict lesser damage when unavoidable crashes occur.

Making it extra kid-friendly are the built-in propeller guards to avoid injuries and keep those fingers off where they aren’t supposed to be.

While Potensic doesn’t specify the plastic used in the Potensic A20 Mini Drone’s construction, it is far from flimsy and may be well-equipped to receive a beating or two, but this is no passport for reckless flying.

Available in five color variants: white, red, green, black, and the American Flag design, your kid will have a blast choosing one of them and earning his bragging rights badge in front of his friends.

Apart from its assistive flight functions, the Potensic A20 Mini Drone does well enough to be called a functional craft, responding to your control inputs with the usual ease found in more expensive drones.

It also has three speed modes to choose from, with the lowest setting being the default speed to allow amateur pilots to attune to the drone’s flight controls seamlessly. Only then can you turn up the notch with the higher speed modes, but only do it when you have the skill or confidence to do so.

We recommend the Potensic A20 Mini Drone for indoor use only, as its lightweight profile might prove a problem outdoors, especially when the winds start to pick up. To avoid making your stepping stone into drones becoming some expensive paperweight for the rest of its life, fly it in spacious indoor areas for maximum safety.

Look, it’s clear that this review isn’t saying this is the best drone in the world. But it doesn’t need to be.

We think it’s a good platform for children to test out their mettle and stretch the baby steps out in the world of drones. While it certainly lacks flight juice and range, the UAV has all the basic functionalities an amateur pilot could ever need, like important assistive flight features, optimal maneuverability, and an appealing design to the youth.

But the best part of it all is that the Potensic A20 Mini Drone is cheap as hell.

You could probably fly these into a wall and get a new one the same day without having your bank account flinching from it — though we wouldn’t advise that, obviously.

We’re being blunt about it, as you don’t see a toy-grade drone every day with such potential for learning while being almost completely disposable.

Our verdict: for the price it over-delivers and will keep a child entertained, though we wouldn’t say it’s one of the best mini drones in the market. Once a little practice of flying has been had, we’d recommend upgrading to a more capable drone.