Potensic D80 Review: Feature Packed, But is it Worth the Cost?

If you’re looking into entering the world of drones, no time is better than now. With various companies pushing out bleeding-edge technology on a regular basis, competition has been on an all-time high.

A clear majority of these are beginner drones to mid-tier drones.

Among these budget-oriented picks, the Potensic D80 shows a lot of potential.

Aimed to fit right into the hands of beginners with its affordable price tag, how does it fare against its contemporaries? Find out in this comprehensive review of the Potensic D80. 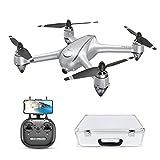 Just like any other modern drone, the Potensic D80 has a dual positioning and locator system courtesy of GPS and GLONASS. This allows it to accurately anchor and record location data, which can be handy in conjunction with its other intuitive features.

There have been some reports of the Potensic D80 straying away from their pilots, with no control over it whatsoever. We do hope those were just instances of a software glitch, and that Potensic has addressed the concern accordingly. The number of positive customer reviews about the product in recent times suggest that they might well have done, and we experienced no issues ourselves during testing.

For beginners, it might be a bit awkward trying to position the drone while keeping track of where its camera is facing. Headless Mode can ease you into the experience, ignoring the position of the drone’s nose while flying where you want it to.

Similar to the TapFly feature of DJI drones, the route plotting function of the Potensic D80 allows it to fly a pre-planned route on your smartphone, courtesy of the bundled app. This means a hands-free experience for you to control the camera at your preferred angle.

Are we sensing a pattern here? Is this the classic feature mimic game we see among companies?

Again, just like the DJI’s drone feature of the same name, the Potensic D80 allows you to choose a subject to do a circular sweep on by keying in radius and altitude values.

Since the Potensic D80 isn’t exactly what you’d call an entry-level drone, it is imperative that a safety feature like this be included in its arsenal.

Either activated by the dedicated Return To Home button or automatically when the battery reaches its low-level threshold, the Potensic D80 records its initial takeoff position in order to make use of this function.

If you want to relocate to a new spot while keeping the drone in the air, its Follow Me mode can be used to keep things hands-free while you settle in. The Potensic D80 automatically follows the controller’s position, tailing you like an obedient dog.

For beginners who are just getting the hang of the Potensic D80’s controls, the One Key Landing/Takeoff function is perfect for enjoying the flight performance of the craft without worrying about starting and landing maneuvers.

You might want to use it less as you’re familiarizing the controls better, as manual takeoff and landing should be learned to fly any drone on the market.

The Potensic D80’s 1800 mAh LiPo battery holds about 16 minutes of flight time, give and take.

This is already crossing impressive juice territory, as some competitors might shave off 2 to 5 minutes off the Potensic D80’s record. Do mind that the speed you’re flying the drone in will affect the overall flight time of the Potensic D80.

Recharge time is a bit on the dismal side, though. 5 hours for 16 minutes is a bit of a stretch (drones in this price point tend to last for around 10 minutes and take 1 to 1.5 hours to charge).

The Potensic D80’s battery has a modular design so you can bring in extra battery packs, which certainly helps to alleviate the stress of such a long recharge time.

The Potensic D80 sports a 120­° 1080p camera for the main First Person View (FPV) footage, as well as capturing videos and stills.

1080p is more than enough for a drone in this price range and while quality isn’t anything near perfection, good videos and pictures can be had especially when the drone is in hover mode.

The live feed isn’t too shabby as well, offering a seamless view of the drone’s front end while in flight.

You can bump up the recording quality to 2k when you equip the Potensic D80 with a decent sized 32GB SD card. Live FPV feed range is limited to 300m tops, however.

The Potensic D80 relies on its smart features like One Key Landing/Takeoff, Follow Me, Headless Mode, and more to appeal to the beginner crowd. This set of functions allow the newbie pilot to ease into the controls of the drone, until he is comfortable going manual.

Controls-wise, the Potensic D80 works well with its 5 GHz transmission frequency, posing no problems in response and range.

The body is mainly built out of plastic, which we infer to be high-grade as the Potensic D80 can take a considerable amount of beating. It needs this as it does not have an intelligent obstacle avoidance system.

One of the most outstanding features of the Potensic D80 is its use of reliable 1800 KV brushless motors for that silent but powerful operation.

Brushless motors also last longer and do not need a lot of maintenance versus conventional ones. This allows the Potensic D80 to zip along at 25mph, which is considerably fast for a drone this compact and light.

Thanks to its GPS/GLONASS dual systems, the Potensic D80 is considerably stable and can maintain its location well when hovering. This also allows it to follow its Route Plotting locations with ease.

The Potensic D80 can hit 25 mph easy without breaking a sweat. Apart from the aforementioned brushless motors, the drone is more nimble due to its light weight, as the use of plastic for the majority of its composition shaves a lot off, as opposed to using metal or alloy parts.

Before every flight, the Potensic D80 requires recalibration by vertical and horizontal spins to properly function with its controls.

For the sub $300 range drones, the Potensic D80 is a viable competitor in the scene.

Packing great features for beginners while offering great overall flight performance is nothing to scoff at, especially for those who want to get serious with the sport. The camera isn’t the most impressive, but can capture decent stills and videos nonetheless.

Previous issues that arose with fellow Potensic D80 owners (like losing the unit due to it suddenly going out of control) seems to put some consumers off.

We’d say don’t have too many fears in this department, as Potensic will replace your device if it proves to be faulty.