If you’re a beginner looking to venture into the drone scene, no time is better than now. This is thanks to the huge variety of budget drone options that have arrived on the scene — and they’re good quality, for the most part, too.

The SNAPTAIN A15 is one of the most viable choices when it comes to features and design without the guilt accompanying expensive purchases, as the drone can be scored for below $100.

The design is advertised to be perfect for those wanting an ultra-portable UAV, and its smart features tease the possibility of future intuitive releases at an affordable price point.

But ignoring the hype the SNAPTAIN A15 has been causing in the drone community, does it actually deliver? Find out in this comprehensive SNAPTAIN A15 review. 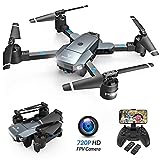 Commanding the SNAPTAIN A15 to take off or land is now an easy task with its built-in One Key Takeoff/Landing feature.

Specially targeted at beginners who are still easing into familiarizing the individual control functions and smart features, these newbie pilots won’t have to worry about maneuvering the drone in these instances, which more often than not would cause crashes when unsupervised. Simply press the dedicated button and watch the SNAPTAIN A15 take off and land automatically.

Any drone owner’s worst fear is losing their craft in the event of low battery levels or signal transmission errors, with it often ending up in thickets of bushes, stranded in a pond, or worse, the seventh dimension beyond the void.

The SNAPTAIN A15’s Return to Home is your best friend in times like this. You can manually prompt the feature with a dedicated button, or can be activated manually based on the aforementioned drone emergency statuses.

The SNAPTAIN A15 offers a Headless feature for beginners, ridding them of the confusion that often comes with learning the controls and how the drone responds to them.

Basically, the craft will ignore its front-end orientation and respond to the controller in a straightforward fashion. This means that whichever direction you press the control lever, the SNAPTAIN A15 will respond accordingly. This makes it easier when compared to the normal flight mode where you have to take into account the orientation of the drone in the 3D plane.

If you want to take precise and stable pictures/videos, you won’t need a gimbal or tripod anymore — at least not for footage where you’re recording from one place. The SNAPTAIN A15’s Altitude Hold allows it to hover at a fixed height, making it a very stable platform to capture stills and footage with extra clarity.

The SNAPTAIN A15 is able to mimic the way you move your smartphone via the Snaptain Air application. This makes use of the phone’s gyroscope to translate your movement and transmit it to the drone, effectively doing your bidding at a moment’s notice.

Who says you can’t have a little fun with your SNAPTAIN A15? Even for amateurs, the drone provides a neat party trick to show off to your friends. With a simple press of a button and a nudge on the direction lever to the point you want the craft to somersault to, the SNAPTAIN A15 performs a 360° flip effortlessly, leaving your audience agape or applauding.

This is the SNAPTAIN A15’s waypoint function, allowing you to plot a course for the drone to follow. Via the Snaptain Air app, simply draw a route on the map on your smartphone screen, and the drone will immediately follow the path, allowing you to go hands-free when you want to change locations, eliminating the need to keep tabs on the craft while doing so.

The SNAPTAIN A15 has a Voice Control feature. You can command it to change directions, and to take off or land. It uses simple command phrases like “Go left”, “Landing”, and “Go Forward”, among other commands found in the manual.

Do not expect top-notch responsiveness though, as you might have to adjust your accent or volume level for the drone to recognize the commands. Still, it’s a neat party trick to show off to your friends.

The SNAPTAIN A15 comes with an 800 mAh battery that provides you 7 minutes of flight time at best. This is rather disappointing if you didn’t know that the drone comes with an extra battery in the kit, doubling the flight time and allowing you to enjoy the experience for longer. Still, 14 minutes across 2 batteries is on the low side.

You’d be hard-pressed to find another drone for the same price and packed features to have the same flight time offered by the SNAPTAIN A15, especially those without spare batteries included.

It’s amazing how the SNAPTAIN A15 could fit a 720p, 120° wide-angle lens camera considering its price. With this, you can capture above-average footage with decent clarity, though you shouldn’t really expect the best color reproduction on this craft, as most shots are either too washed-out or have a significant amount of distortion/ lens flare.

Still, this shouldn’t discourage you from the image capturing abilities of the SNAPTAIN A15, as this is leagues better than what the cheapest toy drones can offer, as some don’t even have any optics installed in them.

Furthermore, the FPV capability you gain is nothing to be scoffed at, especially as the drone allows you to have an immersive flight experience with its VR compatibility.

The SNAPTAIN A15’s controller still follows the basic layout of dual joysticks, surrounded by dedicated function buttons such as Return To Home, Headless mode, and more. Furthermore, trimming controls are present to allow you to calibrate the drone’s flight performance.

You can also hook up your smartphone to the controller via the dedicated bracket, making it easy to enjoy and operate the drone via its FPV live feed. More than that, additional smart features are unlocked via the Snaptain Air app such as its waypoint mode, making it a cohesive controller experience all in all.

First and foremost, the SNAPTAIN A15 still adapts the classic quadcopter layout for that balanced structure and aesthetic.

It is also made up of durable ABS plastic and some alloy components, making it quite resistant to crashes and collisions despite its smaller stature. Did we mention that this bird is foldable as well? It’s a rarity to spot a foldable drone this affordable, with the additional features it includes, but it squeezes a portability option into its design seamlessly.

Aesthetics-wise, the SNAPTAIN A15 gives off a futuristic, mechanized vibe with its clever use of sharp-looking lines and edges, shying away from the curves and contours that most modern drone designs sport.

Apart from that, the SNAPTAIN A15 is a middleweight of sorts as it loads up 680 grams of technology and parts in it. This means better stability during moderate wind speeds which would otherwise blow toy drones off their path even if they tried their hardest to fight against the current.

As for performance, the SNAPTAIN A15 has no problems in responsiveness to your control inputs and immediately follows your commands with ease and nimbleness. Apart from that, the SNAPTAIN A15 is an incredibly stable drone, whether it be on the move or set to hover.

It also comes with three speed modes that you can choose from depending on your skill and confidence level. This keeps the craft safe when a beginner is piloting it, safeguarding it from sudden speed bursts that would otherwise occur if it had no speed limits set into it.

Its range leaves a lot to be desired though, being limited at an 80-meter radius from the controller.

Signal consistency is another thing to be aware of, as it sometimes cuts off, leaving the SNAPTAIN A15 dangerously on its own facilities for a brief moment, posing a greater risk of crashes in the long run. We would highly advise that you keep the drone within your line of sight when flying it, and avoid signal/interference crowded areas that may degrade the controller’s signal transmission to your drone.

Despite some serious shortcomings concerning its control experience, all is forgivable given the SNAPTAIN A15’s feature-rich package.

While curiously priced like a toy drone, make no mistake: the SNAPTAIN A15 isn’t an out-and-out toy. It doesn’t mess when it comes to functionality – something that toy drone manufacturers purposely miss in order to fit into the production budget.

The SNAPTAIN A15 is the perfect platform for beginners who want an extensive learning experience for a price that’s justifiable.

While it clearly isn’t the best of the best, this bird offers a lot more without leaving out the fundamental functions handy for amateur use. A camera drone, with intuitive features on-par with some drones that are over a hundred bucks premium, the SNAPTAIN A15 is a definite steal waiting to be snagged.