If you’re a drone enthusiast and have managed to pass the hobby to your kids, siblings, or younger friends, how exactly do you get them started? With toy drones, of course.

You wouldn’t want them to spend a fortune on something they can’t even fly themselves, so a “disposable” unit is a sane choice.

There are tons of toy drones in the market to choose from, but only a few are viable to fly, let alone usable. One of the most well-received models available is the SNAPTAIN H823H, a super-affordable mini drone that guarantees an enjoyable learning experience within its feature-packed construction.

What should you expect with this budget-oriented UAV? Read on in this SNAPTAIN H823H review to find out. 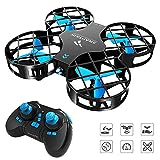 As the SNAPTAIN H823H is targeted at kids or total novices regarding drones, flight control can be tricky considering the 3D plane of motion that you have to take note of constantly when flying a drone. With the Headless Mode, it ignores the front-end orientation of the craft completely, allowing you to maneuver it based on your perspective. This means when you push the control lever forward, the drone flies forward, and so on and so forth.

Beginner-friendly means the drone taking care of itself when the pilot can’t necessarily do so. This handy One Key Return function allows you to recall the SNAPTAIN H823H when you want to land it, getting rid of the hassle in maneuvering it back to you.

The SNAPTAIN H823H’s version is a bit tricky though, as you have to move the right lever to cancel the mode and stop it in its tracks. This is because the drone relies on the controller signal to find its way back to you since it doesn’t have GPS capabilities that would otherwise record its initial location and automate the whole process by itself.

For most drones nowadays, their own versions of Altitude Hold has the craft hovering at a stable position, which can either be used to keep it stationary for a moment or to provide a stable photo and video shooting platform.

The SNAPTAIN H823H’s Altitude Hold lets you hover or control the drone at the same time, maintaining a set height so you won’t have to worry about altitude control when flying.

Your young pilot won’t have to worry about doing that treacherous takeoff or landing maneuver anymore, as the assistive One Button Takeoff/Landing function takes care of it. When initiated, the SNAPTAIN H823H will slowly lift off and hover in place until you control it otherwise. The landing will also be a gradual process, slowly descending until coming into contact with your landing area.

The 3D Flip function is a neat party trick packed by the SNAPTAIN H823H, allowing it to perform aerial somersaults with accuracy and stability.

The SNAPTAIN H823H is required to be at least 3 feet above the ground to initiate the function, which you can activate with its dedicated button and a simultaneous direction lever prompt to let it flip in the corresponding direction.

The SNAPTAIN H823H’s LiPo batteries offer around 7 minutes of flight time, give or take. While this might be a bit too low for some, SNAPTAIN was gracious enough to include 2 more battery packs in the drone kit, extending your flight time threefolds.

Moreover, these batteries take about 45 minutes to fully-charge, which in all honesty is an impressive feat in replenishing the packs, unlike some pricier models that can take up to 3-6 hours of charging for the same amount of flight time.

Sadly, the SNAPTAIN H823H doesn’t feature any optics in the package. The super-affordable price might’ve given you a hint, but in case not, here it is. You won’t be needing it anyway since the mini drone’s specs isn’t up for any kind of shooting any time soon. You’re better off investing more money into a higher-end model if you want to incorporate filming capabilities into the hobby.

The SNAPTAIN H823H sports a cute remote controller – and we’re not just talking about size, as it literally looks like a little nugget of joy that’s specially designed for little hands.

Despite the little size of its controller, SNAPTAIN has managed to fit a healthy selection of controls for the drone. The ubiquitous double-joystick configuration is present, as well as trimming buttons, dedicated mode controls, and the power switch with an accompanying LED indicator.

The SNAPTAIN H823H is basically a frame in its entirety: thin plastic housing for the electronics and battery, short arms that extend to mount the motors, and a protective cage design around the propellers.

While it isn’t something you’d call a solid-built drone, the SNAPTAIN H823H is well-designed to fit its target market of kids aged 14 and below.

This obviously has the drone braced for crashes and collisions, especially the open-air cage guards for the propellers, which not only protects them from damage but protects your kids’ fingers in the event of unintentional contact with them.

The SNAPTAIN H823H is no performance-oriented drone by any means, but its responsiveness to the remote control inputs is applaudable. It has three speed modes to choose from to ease the learning curve of flying the craft, which also keeps it safe from accidental crashes that may result from newbie pilots flying a drone without special speed restrictions embedded in them.

This drone was designed with an indoor flight purpose in mind, so don’t expect it to perform as well outdoors, especially considering its ultra-light profile that may be prone to drifting or even crashing in the event of moderate winds.

Do note that the SNAPTAIN H823H’s pairing process is a bit glitchy as it needs to be paired with the controller every single time you turn it on. Maybe this is intentional, although that would be weird.

Trim adjustment is something to look out for too, as the drone doesn’t always retain its trim settings.

For a price lower than a restaurant meal, you can have your kids experiencing the joys of drone flight with the SNAPTAIN H823H.

While it clearly doesn’t have all the bells and whistles, you really can’t complain given the number of assistive features and tricks the drone has up its sleeve.

Getting kids into a fun activity without boring them with technical stuff will have them going for it. This is probably one of the best drones for children.

More than the capabilities of the drone, it is designed to appeal to a younger audience with its novel design and aesthetic, making it a conversation piece of sorts for their friends and peers. It’s all fun and games until…nope, no catch here.

The SNAPTAIN H823H delivers loads of exciting experiences in a super-affordable price range, no parent could say no to it.