UPair Two Review: Is There Anything This Drone Can’t Do? We Explore

Breaking out into a more premium UAV territory is an exciting adventure, but it pays to do your research.

The midrange of the drone spectrum is home to some of the most promising deals, whether you’re looking for excellent cameras, beefy flight times, or just better overall operability for a bargain. While certainly not on par with the level of performance of the high-end market, there’s certainly a lot of quality that can be found.

One such drone appears to be the UPair Two, an innovative quadcopter from the slowly-but-steadily-rising Chinese brand UPair.

This drone has the usual set of features that you’d normally see on a unit at the $500 price range but boasts “excellent” content creation features with its triple-lens camera.

Find out how this bird fares under scrutiny in this comprehensive and honest UPair Two review. 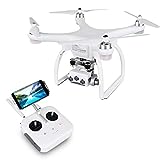 This makes use of a GPS module to accurately chart its location on a real-time map, connecting and communicating with overhead satellites to accurately find its bearings in a simultaneous fashion. This is useful for overall stability, as well as augmenting the assistive flight functions.

Beginners and experienced pilots need not worry about the hassle of having to manually get up in the air, or get down from a journey. The one key take-off and landing function of the UAV handles it with ease, keeping the initialization and retrieval process seamless.

There is a fail-safe feature in the event of potentially risky events such as low battery levels, a spotty signal transmission stream, or other unavoidable errors. In these instances, Return To Home automatically kicks into action, tapping into the last recorded takeoff point for rendezvous purposes.

You can also activate this feature manually if you don’t feel like flying the craft back to your position. Who does?

By downloading the UPair smartphone app, you can access the waypoint mode called Flight Path. This brings up an accurate map of the current operation area, allowing you to mark specific points on the map to which the drone will follow and fly on.

This is handy if you don’t want to manually pilot, such as to focus more on camera work while letting the drone fly automatically on your desired route.

This can be used to film you from various angles whilst you take part in a different activity.

This system is made up of flight sensors that gather important data while in flight, especially when the drone is in a hovering position. This data is then processed by the flight automation algorithm for a real-time adjustment in its position, aiming for a stable, driftless performance.

Much like any other drone from the last five years, this quadcopter also features a Follow Me function. This is a staple for content creators who frequently fly solo. Follow Me allows you to select a target to track, following it at a constant speed and distance for a consistent shot composition at all times.

This is rather useful especially when doing outdoor vlog-style content, as you won’t need to control the drone when you want a comprehensive shot of you and the scenery.

While this is certainly not targeted at beginners who want their first taste of unmanned flight, its Headless Mode comes handy if they do opt for the drone as their starting platform.

This allows the drone to disregard its current front-end orientation (nose/camera position) and now responds to control inputs in a more straightforward manner, relying on the pilot’s front end judgment for proper flight experience.

No need to keep tabs on the 3D positioning of the device with this simplified flying mode.

Altitude Hold gives the drone the capability to act as a tripod for a stable shooting platform, especially when you’re doing wide-angle shots. It can also serve as a fall back function when you feel like losing control while in the middle of flying, careening to an eventual stop and hovering at a fixed height from the ground automatically.

The UPair Two has a beefy 5100 mAh Li-Poly battery that supplies up to 24 minutes of flight time, give or take.

This is actually pretty decent for its price point and specs, matching some of its pricier counterparts toe to toe — especially when you factor in its heavy weight. This makes it one of the drones with the best battery life that are currently available in the recreational consumer market.

The intelligent battery comes with a level indicator built into its package for easy tracking of the current capacity for convenience, which is further improved as you can charge the battery and the controller in one sitting. Pretty economical and time-efficient design if you ask us.

The UPair Two sports a triple-lens camera system comprised of the main 1/2.2-inch CMOS sensor that is 4K UHD-capable, while the auxiliary lenses are 2K FHD-capable.

This combined optical power allows the drone to capture 4K UHD videos at 30 fps for cinematic montages or the 2K 60 fps route for slow-mo ready footage. As for images, you can shoot from an already decent 8-MP quality to a whopping 16-MP for extra clarity and detail.

Stability is taken care of the 3-axis motorized gimbal, which is made from aluminum for greater balance and resiliency. It also offers a 90° level of adjustment for you to get the right level of perspective you need.

These impressive specs and features mean that we judge it to be one of the best photography drones.

The UAV’s live FPV feed is taken care of the 5.8 GHz wifi band for range and lesser chances of interference with the controller signal.

UPair Two goes with the simplistic route for its controller, opting for a clean-cut design with a hint of sleek professionalism in the mix. It features the usual dual joystick layout, dedicated function buttons, and scroll wheels for maximum convenience.

The controller is also balanced in weight, which when combined with the extra-large body, is an ergonomic piece of hardware that’s comfortable to hold even at extended periods of time. The buttons also have a nice tactile feel to them, as well as the rubberized grips that are there for those who have extra-sweaty hands.

While FPV calls for the controller to have a mandatory smartphone mount, this particular unit has a slightly well-sized one to accommodate wider screens like tablets and larger smartphones.

The UPair Two is a quadcopter that goes with a fixed-wing design, forsaking the foldable route completely. The white color scheme is an immaculate take on aesthetics, which can be a make or break point for some.

Construction is mostly made up of polycarbonate and ABS materials, giving the drone some degree of durability to it. We’re saying “some”, as the drone is a bit flimsy and thinly-made in certain places, making them prone to breakage in the event of a crash. It’s sane advice to fly safely no matter who well-built or not a drone is.

The longer landing legs are designed to properly protect the camera unit which hangs considerably low under the drone’s belly, keeping it far from the risk of damage which can happen on an uneven landing platform.

The UPair Two is certainly outstanding in terms of flight performance, as it can translate your control inputs into actual maneuvers instantaneously at a considerable range of about a kilometer or two. This is already good enough for a “beginner” content creation drone, allowing you to cover enough ground to maximize your concept shots.

The max speed of 50 kph isn’t the fastest in the show, but it certainly has the drone zip effortlessly thanks to the super-efficient brushless motors that have a better power to weight ratio, virtually maintenance-free operation, and a longer service lifespan when compared to their brushed cousins.

Stability is taken care of by the optimal flow system and somewhat passively by the weight of the drone, which is considerably hefty in comparison with its contemporaries. This makes it more resilient in a windy environment, forgoing the need of postponing your shoot in the presence of the occasional breeze.

For those wanting to venture into the middle ground between amateur and professional aerial photography/videography, choosing a drone that can offer the best mix of features can be tricky. At this stage, you’d want the optimal value for the money, especially when constrained by a tight budget.

Luckily, this UAV is an excellent blend of assistive and intuitive flight features, stamina, performance level, and optics. We’re really big fans of the triple-lens system as the combined operation of these make image quality top-notch and consistent at all times.

There are also downsides to this almost-perfect drone, though.

Knowing that there’s no obstacle avoidance system to prevent such circumstances, you’ll need to be wary when flying. You won’t want to be involved in too many collisions.

But for an overall assessment, the UPair Two ticks a lot of boxes in terms of must-haves and presents an excellent bang for the buck value.

Certainly, this bird can hold its own against the big names in the drone scene, giving you no reason to snob its capable hindquarters at all.